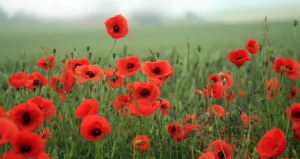 Armistice Day, Veteran’s Day, Poppy Day, or, as in Canada, Remembrance Day, all refer to the time we set aside to reflect upon and commemorate the sacrifice of those who dedicated themselves to serve, fight for, and die for our freedom. It is only fitting that we dedicate our entire edition of Maturity Matters this month to highlight some of the lesser known facts of this day.

•Remembrance Day was first observed in 1919 throughout the British Commonwealth. It was originally called “Armistice Day” to commemorate armistice agreement that ended the First World War on Monday, November 11, 1918 at 11 am – on the eleventh hour of the eleventh day of the eleventh month.

•The poppy is the symbol of Remembrance Day. Replica poppies are sold by the Royal Canadian Legion to provide assistance to Veterans.

•The poppy became widespread in Europe after soils in France and Belgium became rich in lime from debris and rubble from the fighting during the First World War. These flowers also flourished around the gravesites of the war dead.

•Many women wanted to play an active role in the war and lobbied the government to form military organizations for women. In 1941-42, the military was forever changed as it created its own women’s forces. Women were now able, for the first time in our history, to serve Canada in uniform. More than 50,000 women served in the armed forces during the Second World War.

•Many women also supported the war effort by assuming many of the jobs typically held by men during times of peace. At the start of the war, about 600,000 Canadian women held permanent jobs, and this number doubled to 1,200,000 during wartime.

•Canada’s Elsie Gregory MacGill was the first women in the world to graduate as an aeronautical engineer. She worked for Fairchild Aircraft Limited during the war. In 1940, her team’s design and production methods were turning out more than 100 Hurricane combat aircraft per month.

•The story of Indigenous service in the First and Second World Wars, the Korean War, and later Canadian Armed Forces efforts is a proud one. While exact numbers are elusive, it has been estimated that as many as 12,000 First Nations, Metis, and Inuit people served in the great conflicts of the 20th century, with at least 500 of them sadly losing their lives.

Closing – What You Can Do:

Remembrance Day is not just another national holiday. It represents a proud history of service, sacrifice, bravery and courage. Wear a poppy on your left lapel close to your heart. If you cannot attend a ceremony in your community, you can observe two minutes of silence t 11 am on November 11. Most of all, talk to Veterans and hear their story, “Lest We Forget.”

In 2018, Statistics Canada reported on the results of the Canadian Community Health Survey (CCHS) and the Life After Service Survey (LASS.) Included in the robust report was the comment that the most common chronic condition observed among veterans (early and recent eras) include back problems and arthritis. Recent era veterans had a higher prevalence of arthritis, depression, anxiety and high blood pressure when compared to earlier era veterans.

“Bravery is the capacity to perform properly even when scared half to death.”